Triple glazing is not as common in the UK as it is with some of our European neighbours. It can be most commonly found in locations like Scandinavia due to its inherent benefits over double glazing when it comes to factors like heat retention.

As the name suggests, rather than just two panes of glass a third is introduced to further its ability to insulate the home in extremes of cold and reduce solar gain in summer. The benefits of triple glazing are clearly visible in this heatmap, showing its superior insulation over standard double glazing.

Is Triple Glazing Worth It?

The most common question surrounding triple glazing is it really worth the additional cost, which can be anything from 30 – 50% higher than conventional double glazed sealed units. Many homeowners are also unsure if it’s necessary for our fairly mild UK climate.

It all comes down to the motivation behind it. In a conventional home you couldn’t justify the cost based on energy saving alone as the difference between double and triple would be relatively minor. This isn’t to say that triple glazing won’t have a positive impact on your home’s energy efficiency, so if this is your motivation it is well worth looking into.

It’s not just warmth that is impacted by triple glazing, in fact significant reductions in noise can be had from the third pane. Installing these units into properties near major roads can increase the value of the home and provide a far nicer and quieter environment for the residents. 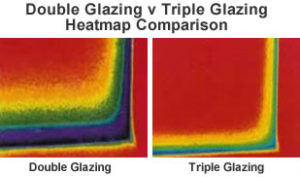 If triple glazing might not be for you there are other options available – for example you could specify conventional double glazing with Argon filled sealed units. Argon is heavier than air which will increase energy efficiency and reduce sound transmission through the sealed unit. If however you’re after a Grand Designs style home with large expanses of glass then triple glazing may be a sensible choice over a large surface area.

Triple glazed window suppliers are pretty thin on the ground compared to double glazing and are more often than not fitters of imported units. However you can certainly find qualified installers in this country, such as Velfac and Rawington.

Get up to 3 FREE window quotes

The quest to harvest renewable energy sources for domestic use is a challenge that many...