Although renewable energy technologies have come on leaps and bounds in the last couple of decades, a solution to economical energy storage remains a big stumbling block in the quest to generate more energy with sustainable technologies and to make renewable energies more affordable. 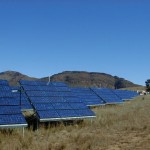 However a team of scientists in Australia are one step closer to finding a viable solution in terms of storing solar and wind energy for use in non-generation times – at night and during windless days. And it comes in the form of a water-based sodium-ion battery, developed by researchers from the School of Chemical and Mathematical Sciences at Murdoch University in Perth, Western Australia.

Although the cost of solar technology is falling, with the price of solar cells dropping, by replacing the more expensive lithium-ion batteries with sodium-ion batteries renewable energy technologies would become even more affordable. Cost has always prevented previous batteries from being commercialised because they have used expensive and rare chemical compounds like molten sulfur. The chemical properties of  sodium – which is both affordable and abundant – are very similar to lithium.

While solar photovoltaic panels and wind turbines are dependent on daylight and wind respectively, the need to find an affordable way of storing that harnessed energy so it can be used continuously would put renewable energy technology in a much better position to take on the the big guns of energy generation – fossil fuels and nuclear power.

The team, headed by Dr Manickam Minakshi and Dr Danielle Meyrick, were challenged to find a suitable material for anodes and cathodes which was capable of accommodating sodium’s ionic size.

Commenting on their work, Dr Minakshi said: “The central obstacle facing sustainable energy is unreliability. Wind turbines don’t turn on a still day. Solar doesn’t work at night and can be hampered in the day by cloud, dust or snow coverage.

“To provide power at non-generation times, excess energy needs to be stored in batteries, but storage technologies now being considered, such as molten salt or molten sulfur, work at high temperatures, making them expensive and impractical.

According to Dr Minakshi the new battery has excellent potential for large scale use, and that includes storing energy from wind and solar farms for feeding in to local energy grids at a later stage – making renewable energy more accessible in developing countries.

E.ON, one of Britain's largest energy suppliers, has revealed the results of a survey...

An installer of solar photovoltaic panels has offered households in the UK an incentive...