Baxi has improved its range of heat only boilers with the introduction of the Baxi Solo HE A, which is unlike other central heating boilers in that it is designed to be fitted flush with standard kitchen wall cupboards. Having reduced the depth of the Solo HE A, Baxi is hoping to appeal to the portion of the market that wishes to combine convenience with high energy efficiency. 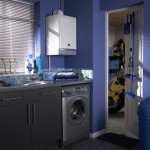 Not only is the Baxi Solo HE A more streamlined than most other wall-standing boilers, the unit exceeds the minimum efficiency levels required for SEDBUK 2005 at over 90 per cent. Operating an energy efficient boiler is estimated to save the average household around £235 each year according to the Energy Saving Trust.

The Baxi Solo HE A is available in 12, 15, 18, 24 and 30 kW outputs and is compatible with Baxi Solarflo domestic solar thermal systems and Megaflo Solar hot water storage cylinders.

Solar devices have become popular in homes across the UK recently as homeowners attempt to save on fuel costs whilst reducing their carbon footprint. At the commercial level, solar panels are set to become even more popular after the Government announced that a ban on local councils selling energy to the National Grid is to be lifted.

Commencing the 18th of August this year, councils across the United Kingdom will be able to generate and sell renewable solar energy to the grid, according to the energy secretary, Chris Huhne.

The Department of Energy & Climate Change has estimated that the lifting of the ban could generate up to £100 million per year in revenue for local authorities across the UK.

After announcing the decision, Mr Huhne said: “This is a vital step to making community renewable projects commercially viable, to bring in long-term income to benefit local areas and to secure local acceptance for low carbon energy projects”.

Whereas the percentage of green electricity produced by local authorities in England is estimated at being no higher than 0.01 at present, Germany boasts figures that are more than one hundred times higher.

It is regrettable that many council buildings across England and Wales are relatively old...

NEXT POST Superhomes Provide Glimpse into the Future for UK Homeowners

The need to conserve energy whilst reducing carbon emissions has been widely publicised...