The Committee on Climate Change (CCC), an independent body established to advise the Government on environmental matters, has suggested that energy companies ought to be forced to insulate every domestic cavity wall and empty loft in the UK over the next four years. 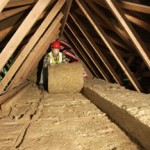 The CCC is of the belief that forcing energy companies to carry out cavity wall insulation and loft insulation would boost the economy whilst saving money for households and improving the environment.

The Chief Executive of the CCC, David Kennedy, said: “The Government should state this ambition and energy companies should be on the hook to deliver these emissions reductions”.

Responding to the CCC report, Christine McGourty, the Director of Energy UK, said: “Energy companies have already made a substantial contribution to improving people’s leaky homes. In the past few years, companies have insulated more than 1.5m cavity walls and more than 2m lofts, helping consumers save up to £260 a year on their bills”.

It is perhaps unsurprising that one of the heads of Energy UK, which represents the electricity and gas industry in Britain, believes that energy companies have done enough to improve energy efficiency and conservation in UK homes.

The CCC’s report, however, highlights a 30 per cent decline in the number of loft insulations carried out in the UK between 2009 and 2010. According to official estimates, 43 per cent of all lofts in the UK are unlagged, whilst 42 per cent of the 8m British homes with cavity walls have not been insulated.

Insulating lofts and cavity walls can greatly improve the energy efficiency of a home, resulting in reduced fuel bill spending for domestic energy consumers. At a time of increasing fuel poverty and heightened environmental awareness, forcing energy providers to insulate all homes in the UK would seem to be a sensible move – especially considering the massive profits generated by such firms.

Dave Timms, a campaigner for Friends of the Earth, said: “For too long energy firms have made huge profits selling ever-increasing amounts of energy while some people freeze in poorly insulated homes. Forcing energy companies to carry out all the necessary energy efficiency improvements is an attractive idea”.

Residents in a Welsh village are celebrating after winning £100,000 and taking the title...

NEXT POST Go-ahead Given to Controversial Wind Turbine Project

A 430ft wind turbine is set to be built in a Derbyshire village, despite almost 90% of...