The Energy Saving Trust (EST) has revised its estimate for how much money a typical household can save by installing solar panels. 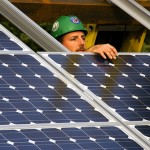 Previously, the EST claimed that as much as £120 a year could be saved on electricity bills by availing of solar energy. Following a review of the technology, however, the EST now claims that a typical solar panel installation will cost up to £16,000 and save just £70 per annum.

The EST had estimated that around half of the electricity generated by domestic solar panels would be used in the home, but the environmental group now believes this figure to be closer to a quarter because the panels only work during the day, during which time most people are at work and not, therefore, using a great deal of energy at home.

The revised estimates by the EST give weight to the accusation that many solar firms in the UK are exaggerating the benefits of the technology.

Jenny Driscoll, of Which?, said: “Consumers must really be on their guard when it comes to solar panels. There is a massive amount of exaggeration about the benefits from salesmen. Remember the households that will benefit the most from solar photovoltaic panels are those with sunny, south-facing gardens who are in all day”.

Responding to the accusation, Virginia Graham, Chief Executive of the REAL Assurance Scheme, a solar panel trade body, said: “We have always been clear that the people who will benefit most from panels are those who are in during the day. We are also working with charities to ensure that vulnerable consumers are protected from mis-selling. We would like to see doorstep mis-selling banned because it is an unsuitable way to promote this technology”.

Doubts remain over the true value of domestic solar panel installations. The EST estimates that £70 can be saved on annual electricity bills, with up to £800 a year being earned through the feed-in tariffs (Fits) scheme. Solar panel installations, however, can cost around £16,000, meaning that many households will have to wait around two decades before the solar panels generate a profit.

With nearly a quarter of UK households facing fuel poverty, research by uSwitch.com has...

Ofgem has instructed a team of forensic accountants to scrutinise the wholesale fuel...