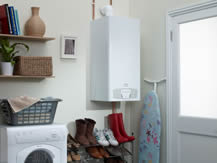 The technological development of central heating systems has become prominent recently as the need for more energy efficient homes has been realised by politicians and homeowners.

Not only is a more energy efficient new boiler beneficial to the environment, which in turn helps the Government meet its energy targets, it is more cost effective; simply put, upgrading from an old E-rated boiler to a new A-rated boiler can shave around £200-£250 off the average household energy bill, which is significant in this age of continued economic uncertainty. Naturally, an upgraded gas boiler will only make a difference so far as gas bills are concerned, which is why Baxi, one of the UK’s leading manufacturers of heating systems, has devised a new concept in home heating: the Baxi Ecogen.

The Baxi Ecogen is unlike any other gas boiler on the market because it is not just a gas boiler. The Baxi Ecogen is a wall-hung gas boiler that also generates electricity for use in the home, thereby making it a dual energy heating and power system. The process of generating both electricity and heat from the same source within close proximity to where such energy is to be consumed is known as micro-combined heat and power or micro-CHP. The Baxi Ecogen employs state-of-the-art micro-CHP technology to provide efficient heating and hot water in addition to cost effective, low carbon electricity.

Combined heat and power (CHP) systems have been used for many years on a larger scale, such as in hospitals and schools. Baxi has taken CHP technology to develop micro-CHP systems for use in domestic environments, which could mark something of a revolution in environmentally friendly home heating and energy generation. Households using the Baxi Ecogen will require less electricity from the national grid, not only saving money but also reduces their carbon footprint; standard electrical consumption can also be reduced by using the Baxi Ecogen alongside solar hot water heating installations. Crucially, the Baxi Ecogen is estimated to reduce average annual bills by up to £600 and the dual system can generate 1kW of electricity, which is enough to power various appliances, including washing machines, computers and televisions.

The consumer organisation Which? has carried out an undercover investigation of the solar...

Following the relative success of the UK Government's Boiler Scrappage Scheme, which...