Originally scheduled for launch in the spring of 2011, the Renewable Heat Incentive may not see the light of day after the coalition Government announced that it might yet scrap the scheme. 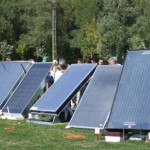 In its current form, the Renewable Heat Incentive would provide around £825 per year to households that generate their own green heat using a range of green technologies including solar water heating collectors.

Taking the average UK household – which uses approximately 15,000kWh of heat each year – into consideration, the Renewable Heat Incentive as it exists today would pay £1,400 per year to the homeowner whose property generates 13,700kWh, with the 1,300kWh difference being filled through energy efficiency measures such as cavity wall and loft insulation.

Biomass boilers would be used under the scheme, however, annual biomass fuel costs could reach up to £575, resulting in a total benefit of £825 per year.

The Renewable Heat Incentive in its current form is clearly beneficial to homeowners who generate their own green heat energy.

Unfortunately, the scheme is likely to increase domestic gas bills by up to £104 (£321 for industrial consumers) by the end of the present decade.

The 40 per cent rise in energy bills could effectively put large industrial firms out of business according to a report in the Telegraph this morning.

Whilst opposing arguments concerning green tax schemes are anything but extraordinary, the Renewable Heat Incentive has faced criticism at a more fundamental level; indeed, a recent study by the Energy Saving Trust has questioned the benefits of using green pumps in central heating systems.

Although the Energy Saving Trust has yet to publish its report on the subject, it is understood that green pumps have been found to be only “variably” effective at heating homes and do not always save money or reduce carbon emissions.

In response to the Energy Saving Trust’s preliminary findings, the coalition Government has announced that it is likely to scrap or substantially change the Renewable Heat Incentive in its current form.

A spokesperson for the Energy Saving Trust said: “Out of 83 sites monitored across the UK during the trial, results indicated wide-ranging performance.

“We are aiming to work out what is causing this variation, focusing on exactly what determines a high-performing heat pump retrofit installation and ensure this becomes standard practice”.

Euroheat's TDA Thermodual biomass boiler is quite unlike other central heating boilers on...

NEXT POST Friends of the Earth Warns on Biofuels ‘Land Grab’

In its recent report entitled 'Africa: Up for Grabs', Friends of the Earth has called on...

One thought on “Renewable Heat Incentive at risk of being shelved”