The first phase of the Renewable Heat Incentive Scheme – the Premium Payment – has been launched to a mixed reaction from leading industry figures. 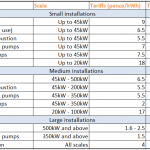 The forerunner of the Renewable Heat Incentive (RHI) was unveiled last week by the Department of Energy and Climate Change (DECC), and means installations of renewable heating technologies such as heat pumps, solar water heating and biomass boilers will become more affordable for homeowners.

With a funding pot of up to £15 million available, DECC believes that up to 25,000 installations could be achieved. The one-off payments range from £300 for solar thermal, up to £1,250 for fitting ground source heat pumps.

Generally regarded as an important and necessary move towards trying to encourage households to invest in renewable heating, the consensus remains that there are still many questions that remain unanswered.

“Until more in known about the eligibility criteria for the full domestic RHI scheme, it’s uncertain whether the RHPP will give householders the confidence to opt for renewable heating, without the certainty of ongoing financial support,” said Chris Davis, business development director for Dimplex Renewables.

Boiler and renewables manufacturer Vokèra said that while the Premium Payment would help, they don’t believe it will be enough to dramatically increase the uptake of renewables. The manufacturer also expressed a disappointed when it came to the criteria for the RHI tariffs, saying they still remained unclear.

“This could be a stumbling block to initial uptake, as homeowners who receive the RHPP are not guaranteed the ongoing RHI tariffs which are expected to launch in October 2012,” said marketing director Eleanor Fox.

Neil Schofield, head of external and governmental affairs at Worcester, Bosch Group also voiced his concerns over the tariff levels, which he said remain very opaque.

However, Kelly Butler, BEAMA Domestic Heat Pump Association’s director was very positive about the scheme. He said he was pleased to see that the scheme is running to the original  time frame so that installers and their customers have a full heating season to specify and install the renewable heating technology measures.

“The RHPP scheme will take the industry one step closer to its goal of one million heat pumps installed by 2020,” he added.

Concerns have been raised that the amount of training available for green technologies is...

After upsetting customers by raising gas and electricity prices, British Gas aims to...