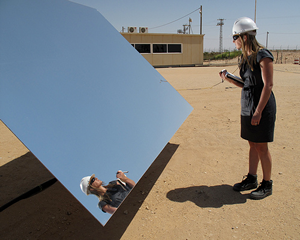 Every so often, a thick and expansive cloud of sand whips up in the Sahara and travels in a north easterly direction towards Europe and the Atlantic Ocean. Rarely, people in the UK will notice the occasional deposit of African sand on their cars, driveways and lawns.

Whilst the thought of something so far away making its way to the UK is remarkable enough, the idea that the Sahara Desert may also supply the nation with green renewable energy is bordering on the far-fetched. However, plans are in transit to turn the Sahara, which covers more than 9,000,000 square kilometres and experiences massive quantities of sunlight each year, into an enormous solar power farm.

Obviously, the Sahara Desert is too vast to be completely filled with solar panels and, in fact, many parts of the desert have experienced ‘greening’ over the last couple of decades as the climate has become marginally wetter. Nevertheless, the world’s largest hot desert offers a unique opportunity for truly massive amounts of electricity to be generated via solar panels. The plan to harness Saharan solar power is spearheaded by a German-led consortium of twelve companies, which includes Siemens, ABB and Deutsche Bank, in addition to one of the UK’s largest domestic energy suppliers, E.ON.

The so-called Desertec Industrial Initiative (DII) plans to invest some £240bn in developing Saharan solar panel farms to provide Europe with approximately 15% of its total demand for electricity by 2050. One of the driving factors behind the plans is obviously to help Europe achieve its green energy objectives, which aim to lower carbon emissions. North African countries and those in the Middle East will also likely avail of the DII’s plans, which include the rollout of one gigawatt power stations in the desert within the next five years.

There is much controversy surrounding the emergence of vegetable oil as a fuel source for...

The Reheat Britain Campaign is an initiative devised by Mick Williams of Williams and...