An engineering professor at the University of Wisconsin-Madison in the United States claims to have discovered a way to artificially emulate the heliotropism observed in sunflowers. If proved effective, the new technique promises to revolutionise the domestic and commercial solar industries. 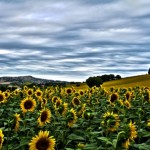 Professor Hongrui Jiang set out to improve the way in which solar panels respond to changes in sunlight. Many commercial solar PV arrays feature built-in GPS and electrical motors to alter the tilt and orientation of panels as the sun moves across the horizon. Although reasonably effective, the existing system is not entirely efficient.

Nature has a different solution to the problem of a constantly moving sun. The position of plants adapts as sunlight changes direction and intensity. This process is known as heliotropism, which describes the diurnal motion of leaves or petals; in other words, as the sun moves, the orientation of plants changes. Motor cells are activated by a shift in potassium ions, causing leaves and petals to flex in the direction of sunlight.

Professor Jiang sought to achieve a similar effect using carbon nanotubes and liquid crystalline elastomer. According to the engineering expert, the new technique should ensure that next-generation solar photovoltaic panels flex and tilt in harmony with the shifting sunlight, thus eliminating the need for complex, expensive and power-hungry electronic systems and motors.

The professor explained: “Carbon nanotubes have a very wide range of absorption: visible light all the way to infrared. That is something we can take advantage of, since it is possible to use sunlight to drive [the panels] directly.

“The idea is that, wherever the sun goes, it will follow”.

The solar industry has good reason to be optimistic about Professor Jiang’s discovery. Whilst improving the efficiency of solar PV panels by approximately 10 per cent, the new system should eventually help to reduce manufacturing costs by ensuring that fewer components are used.

Households would further benefit from the technology because relatively inexpensive panels would be able to warp in the direction of the sunlight, thus improving output on roofs that are not ideally positioned or angled to fully harness solar panel.

Electricity generated by solar panels can be used throughout the home or exported to the National Grid under the Feed-In Tariff.

Residents of North Kilworth, a small village nestled in the leafy south Leicestershire...

It might come as a surprise to some but a recent survey into smart meters has revealed...