The Scottish Government has yet again upped its green energy targets, announcing a new target to supply at least 30% of the country’s energy from solar energy and other renewable sources by 2020. 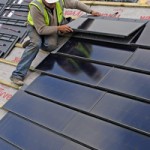 Minister Ewing also announced plans to establish a Scottish Renewables Advisory Themed Group, which will provide expert advice from industry and other stakeholders on how to achieve Scotland’s full renewable energy potential.

Director of Policy at Scottish Renewables, Jenny Hogan said: “The Routemap frames Scotland as the place to invest in renewable energy within Europe.”

E.ON has today launched its latest online gas and electricity tariff, which it guarantees...

Energy regulator Ofgem has handed out a £1m fine to British Gas for misreporting the...