An Englishman’s home may be his castle, but if a scheme being implemented by North Kesteven District Council proves successful, many of those castles may end up being made from straw. 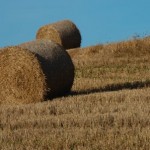 The local authority has recently built four properties out of the material, which was purchased in bales – 450 of them per two-storey home – from a local farmer.

The council’s property manager, Mick Gadd, explained: “He [the farmer] couldn’t believe we were going to build a house with it. He’d been selling 10 and 20-bale loads for horse bedding. He was very happy to help”. Mr Gadd added the council spent just £2 per bale.

North Kesteven District Council is not the only local authority to invest in straw houses, however, as Hastoe Housing Association in Essex has teamed up with Epping Forest District Council to build four such properties.

Sue Chalkley, the Chief Executive of Hastoe Housing Association, said: “We were seeking an opportunity to use straw and it was a happy coincidence that the local authority was interested too. Fuel poverty is a really serious problem and straw homes are a potential solution”.

While the Big Bad Wolf rubs his paws in delight, many people might scoff at the thought of living in a straw house. Everybody knows that English people like brick houses, so why would any developer bother with straw?

Marion Brighton, of North Kesteven District Council, hinted that the reason behind the developments might have more to do with financial constraints than environmental concerns. The council leader noted: “Very few council houses are being built. Our straw houses are not a gimmick, we are serious”.

Meanwhile, ModCell, a company based in Bristol that specialises in the development of prefabricated straw bale and hemp cladding panels, is said to have rigorously tested straw structures for energy efficiency and fire-proofing. The firm also claims straw houses can withstand 120-mph gusts of wind and are twice as fire-resistant as required by building regulations.

Straw homes do not necessarily require traditional central heating systems, as the straw panels breathe naturally and are said to provide superb insulation during the winter.