US property tycoon Donald Trump has called the building of an offshore wind farm in Scotland ‘disastrous and environmentally irresponsible’. 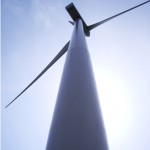 The development of an offshore wind farm about 1.5 miles from his luxury £750 million championship golf course in Aberdeenshire remains a bone of contention for the billionnaire. With Trump’s golf course due to open in July 2012, the proposed £200 million offshore wind project has already seen proposals for 33 wind turbines reduced to a maximum of 11.

Following his pledge to use “any legal means” to fight the proposed wind farm, the tycoon has written to Scotland’s first minister, Alex Salmon, to voice his objections, following a planning application for the farm off Aberdeen Bay, which was submitted to Marine Scotland in August.

The letter describes the wind turbines as “disastrous and environmentally irresponsible”, and Trump says “instead of celebrating the start of something valuable and beautiful for Scotland, this ugly cloud is hanging over the future of the great Scottish coastline.”

Despite his wealth and connections, Trump is likely to be fighting a losing battle. The wind farm, one of a number of test centres viewed to be essential if the UK is to reach its 7,000 offshore wind turbines target. Of strategic importance to Scotland’s renewable energy ambitions, the project is supported by both the Scottish Government and the European commission.

It's been a while coming, but EDF Energy is finally following in the footsteps of its...