Mirrorstone’s Infrared Panel Heaters represent a great new way for people to heat their rooms, and one that will enable them to save money, energy and space at a time when all three are at an absolute premium.

But, as with any new form of technology, there’s been some initial scepticism and doubt in people’s minds about infrared heating. After all, it’s only natural for people to ask how safe it is and how it might benefit them, especially as the technology behind it is so radically different from any heating system they’ve experienced before!

Unlike the more traditional electric convection heaters that we’ve used in our homes and workplaces for so long, infrared panels heat the objects in a room and not the air between them. A far more pragmatic, no-nonsense approach, infrared is a more energy-efficient method of heating a space and one that can potentially save the user up to 60% on their heating bills when they convert to it.

However, because infrared works so differently, many people are understandably rather reluctant to trust to its safety, preferring ‘The-Devil-They-Know’ in the shape of their existing convection heating system, despite the fact that it’s costing them so much more to run and maintain than infrared would.

But, you may be asking, how can heating solid objects be so much more cost-effective and energy-efficient than heating “thin” air? Well, due to the fact that the objects in a room have a lower molecular mass than the air, it takes fewer units of energy to heat them directly. This means a convection heater has to work a lot harder and for longer than an IR panel just to maintain a constant room temperature.

So, long after the IR panel has done its job and been switched off by a thermostat, the convection heater will still be labouring away to reheat the ever-fluctuating mass of air. As you can imagine, the convector heater consumes a great deal of electricity while carrying out this never ending task, and this increased workload is passed on to the user in the form of a huge heating bill!

This short video gives a brief overview of the way IR panels work:

As you’ll have seen in the video, infrared panels employ the same type of electromagnetic (EM) waves as the sun, only without the UV (Ultraviolet) element that can harm the skin, which makes IR the oldest, safest and most natural form of heat energy in the universe.

It’s therefore no surprise that so many yoga and health studios are beginning to adopt it as their primary source of heating, especially as it’s known to be benefit the circulatory system and muscles.

It’s already well-known that air heated by convection rises as it’s warmed, only to fall again once it cools. This never ending cycle produces atmospheric moisture and makes a room feel stuffy and oppressive. You’ll have seen this for yourself in the condensation that forms on your windows on a cold day, and you’ll know that it can cause mould and mildew to form if it’s allowed to go unchecked.

Conversely, infrared panels produce a dry, consistent type of heat that stops mould dead in its tracks and creates a comfortable and much healthier living environment as a result. Obviously, much like conventional electric heaters, infrared panels also become quite hot to the touch when they’re switched on. This is nothing new because we’re all used to avoiding heaters when they’re switched on.

However, even at up to 120°C, an IR panel’s PET (Polyethylene Terephthalate) surface won’t harm the skin if it’s accidentally touched, thanks to its efficient method of dissipating heat energy.

Infrared heating panels are incredibly versatile and can be installed quickly and easily by one person with no specialist knowledge whatsoever. Indeed, anyone with a drill, a spirit level and an hour to spare can fit a panel to a wall or a ceiling, where it will save a great deal of space that was previously lost to a storage heater or the like. Just 22mm thick, IR panels are sleek and streamlined, providing a discreet heat source that people will mistake for a simple framed picture, especially given the fact that images can be printed directly onto their surface material. Indeed, their ability to be mounted high up on a wall means they’re not only attractive, space-saving devices, they’re also very safe because they’re well out of reach of inquisitive fingers and vulnerable fingers. 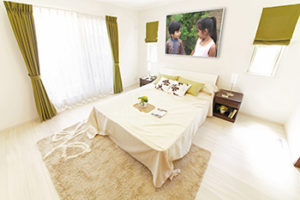 Infrared panel heaters are built very simply, consisting of just a few components. Most importantly, none of the components move, which means there’s very little that can possibly go wrong with them throughout their 25 to 30-year lifespan. Contrast this with the annual cost of servicing a gas or electric central heating boiler and you’ll begin to appreciate the potential savings of maintenance-free IR panels.

Energy savings and costs aside, all of Mirrorstone’s IR panel heaters are manufactured using 100% recyclable materials, making them a great deal cleaner and greener to run than any other form of heating that’s available on the market today.

Mirrorstone’s infrared panel heaters come in all shapes and sizes, from Custom Printed models to Classic White IR Panels that can be concealed discreetly in a suspended ceiling, disguised as a regular ceiling tile. Mirrored IR Panels are perfect for bathrooms as they don’t steam up, while sleek black and white Glass IR Panels will help create the modern, minimalistic look in homes and offices that’s so in vogue, right now.

If you’d like some more information about Infrared heating, please don’t think twice about calling Mirrorstone Infrared Heating on 0116 436 2250 and visiting the website at: www.mirrorstoneheating.co.uk. You can also check out the latest news from the world of IR heating on the Mirrorstone Facebook and Twitter social media pages.

Baxi has released the first micro-CHP, or Combined Heat and Power, system for the home...

The Renewable Heat Incentive (RHI) has been developed by the Renewable Energy Association...