Ask any child to draw a house and they’ll more than likely present you with a front elevation featuring a window at each corner, divided into four neat squares; the classic sash window.

Such was the success and the ubiquity of the sash window for over 300 years, from grand homes like Chatsworth Hall in the 1600s to the back to back terraces built in their thousands during the industrial revolution, it seems our window on the world has always been the sash.

Most sash units have now put in a century or more of service, and as such it’s rare to find an original that doesn’t require a full renovation which can be very costly.

So if your old sash windows are beyond reasonable repair, exactly what options do you have when it comes to replacing them?

History can repeat itself – at a cost.

The easiest alternative, and one many people opt for, is to replace sash windows with straightforward, top hinging casement windows which, from the pavement at least, can imitate the overall lines of a sash.

This may be cheaper. But for many, it lacks the real charm and character of a genuine sliding sash, as well as its many advantages. Among them, the ability to control room temperature with surprising precision by letting just the right amount of cool air in at the bottom and warm air out at the top.

Of course, the purist approach would be to replace old sash windows with like for like hardwood replicas that match the originals in every detail.

That means each one will have to be manufactured from scratch to a bespoke size, so straight away you’re looking at a premium for ordering a one off, rather than an off the peg product.

Secondly, sash windows, while appearing simple, are actually complex pieces of engineering that use a system of cables, concealed counterweights and pulleys to achieve that pleasing ‘slide and stay put’ operation.

(Robert Hooke, who is credited with inventing the modern sash in the mid 1600s, has form in this area, having gone on to invent the iris diaphragm used in cameras, the universal joint and the balance wheel for the watch!)

The upshot is that replacement wooden sash windows will inevitably make a sizeable dent in your home improvement budget. Typical prices for a single window start at around £550 and can end up north of £1200 – and that’s before the cost of installation.

A sash window for the 21st century 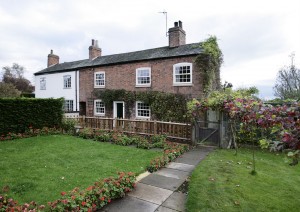 If your home is listed or in a conservation area, the bad news for your budget is you’ll have to simply swallow hard and pay the price for replacement sash windows in exactly the same style and exactly the same material as the originals – comforting yourself with the thought you’re preserving the heritage of our built environment for future generations.

If you’re replacing sash windows and your house doesn’t have any planning restrictions, however, then there are a lot more options open to you, among them UPVC

Today’s UPVC double glazed sash windows (often referred to as sliding sash windows) are built in such a way that they imitate exactly the action of classic sash window, with two moveable sash panels that can be slid open and positioned exactly as you want them.

The principal difference is that instead of the cord and weight method, modern UPVC sash windows use a system of spring balances and friction stays to achieve the same effect. This has the added advantage, in many cases, of allowing the sash windows to tilt inwards for extra ventilation and easier cleaning – particularly useful in first floor windows.

With UPVC frames and sashes, of course, come all advantages of plastic over wood that we’ve grown used to over the years; virtually maintenance free and practically zero susceptibility to damp and rot; strength and security against intruders; and, of course, the superb insulation and energy efficiency that’s mandated in building regulations for all new windows nowadays.

In fact, thanks to modern materials and precision engineering techniques, today’s UPVC sash designs are up there with the most efficient casement windows on the market.

One of the largest manufacturers of UPVC sash windows is Eurocell, and Technical Office Manager, Michelle Bestwick-Walters, is more than aware of customers’ concerns over heating costs:

“Most people’s experience of a sash design is the old fashioned, loose fitting wooden variety, which people can assume to be more draughty and not as airtight or energy efficient as a conventional casement. But with contemporary features that make gaps more airtight in the closed position, a modern UPVC sash is far more efficient than ever before. Once you see them in place, and feel the difference they make, you can appreciate how efficient they really are” 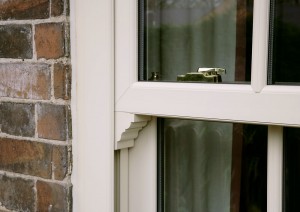 As with most UPVC products these days, sash windows are available in a broad range of colours and finishes, including woodgrain effects, to reflect the style of the period properties they’re designed for.

In many cases, authentic details such as decorative horns, period style hardware and Georgian bars add to the impression of windows that look, to all intents and purposes, exactly like the originals.

The real difference is in the level of comfort and convenience they bring to the home – a ‘best of both worlds’ combination of period style and 21st century quality, security and energy efficiency.

That and, of course, the cost. For a single standard UPVC sash window, custom fabricated and installed, you can expect to pay perhaps a third of the price of a hardwood version.

And while the purists and conservation authorities might baulk at the use of modern materials and precision computer controlled production techniques in a Georgian or Victorian home, it’s likely Robert Hooke – a true innovator of his age – would more than approve.

Get up to 3 FREE window quotes

Electric heating is a great option when considering how best to heat a space. Whether...

NEXT POST Central heating listed as the top priority by homebuyers

A recent survey has revealed that 79% of UK homebuyers see central heating as a must...