Britain’s stock of solar photovoltaic panels produced more electricity in July than during any other month, according to sources within the solar industry and official government figures. 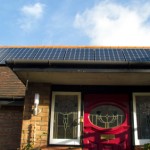 July 2013 has been one of the hottest, driest and sunniest on record. Added to the fact that solar panel installations in the UK now number more than 450,000, the sunny conditions have provided the perfect opportunity for solar technology to prove its worth.

The Solar Trade Association estimates that at least 100,000 households in the UK added solar panels to their homes in the last 12 months. The rising number of installations belies fears within the solar industry that domestic interest in solar PV would tail off after the government cut Feed-In Tariffs (FITs) from 21p/kWh to just 16p/kWh last August. FITs had been paid at a rate of 43.3p/kWh in 2011. Currently they stand at 14.9p/kWh.

The UK Government blamed the reduction in FITs on normal market conditions, reasoning that lower production costs still made solar a viable option for domestic users. The solar industry was not convinced, prompting several of the largest groups to challenge the government’s decision in court.

Today the situation seems less bleak. A warm, sunny July has exploited the potential of the UK’s solar stock, which is able to generate up to 6 per cent of the country’s electricity needs on a sunny day. Total capacity is now 2.7GW. And households still seem interested in solar as a means to reduce energy bills.

Discussing the impact of solar on Britain’s energy needs, Ray Noble, of the Solar Trade Association, said: “The UK generated around 16,000MWh on Tuesday compared to 9,900MWh of wind. The total consumption of electricity on this relatively calm day was 766,987MWh”.

But renewable energy adviser, Alan Simpson, formerly of Labour, insisted that the UK had much to do to become a major player in the European solar industry.

Simpson said: “Germany [which generates up to 40 per cent of its electricity from solar PV] is now light years ahead of the UK and benefiting. Within a decade, many German towns and cities could be substantially off-grid and will be taking the grid system out of the hands of the private energy companies”.

PREVIOUS POST Is door to door selling the way to save the Green Deal?

British households may not have responded to the Green Deal with as much enthusiasm as...

RWE npower and SSE, two of the Big Six energy suppliers operating in the UK, have...