Homes are responsible for around 40% of all UK carbon emissions and finding a more efficient heating system will help to reduce your carbon footprint.

If you’ve never paid much attention to your carbon footprint, these 10 climate change facts could encourage you to take action.

What is a carbon footprint?

A carbon footprint is a measurement of how much carbon is released into the atmosphere as a result of the actions carried out by a person, business or country.

Whether big or small, each of us has a carbon footprint and it’s influenced by a number of things, including:

If you’re not concerned about the amount of carbon your lifestyle is having on the planet, these climate change facts might encourage you to think again.

1. Record levels of carbon in the atmosphere

There’s more carbon in the atmosphere than at any other point in the past 400,000 years.

Carbon in the atmosphere keeps heat in the Earth’s atmosphere causing global temperatures to rise, leading to:

Up until 2013, carbon in the atmosphere fluctuated between 200 and 280 parts per million. In 2013, the level passed 400ppm for the first time and has continued to rise ever since.

As a result, our climate is very different to that experienced by previous generations and it’s been suggested that we’re living in the ‘Anthropocene’ age, where human activity is the biggest influence on climate.

Governments are setting targets for lower carbon emissions but according to BP’s Review of World Energy 2019, we’re actually increasing our impact on the planet.

In 2018, carbon emissions grew by 2%, the highest rate for 7 years. As more carbon is released into the atmosphere, we’re seeing more extreme weather patterns, which is changing the energy habits of homes and increasing demand for heating and cooling.

As the use of natural gas and oil continues to grow in 2019, emissions are expected to rise yet again.

3. The 20 warmest years on record have happened in the last 22 years

If you’re a fan of sunbathing you might think this is good news but we’re talking really high temperatures that could lead to droughts and heat waves in some places.

Earth Overshoot Day marks the date where humans have consumed more resources than the planet is able to regenerate in a year. This date is getting earlier each year, arriving on July 29 in 2019.

If everyone on the planet had the consumption habits of a UK citizen then Earth Overshoot Day 2019 would have been May 17.

As part of the Paris Climate Change Agreement, governments around the world have committed to reducing their emissions to prevent global temperatures increasing.

Up until recently, it’s been widely believed that limiting temperature increase by 2C would be enough but many scientists are now calling for the target to be 1.5C.

Our oceans, much like trees, act as lungs, absorbing carbon from the atmosphere but it reacts with seawater and becomes acidic. As levels of carbon have risen (dramatically) so has the amount being absorbed by the ocean which is increasing their acidity levels.

7. A truck-load of plastic is dumped into the ocean every minute

On top of the acidity, the oceans are also being filled with plastic. Our daily lives are full of single-use plastics and they often wind up in the oceans.

Over time this plastics slowly degrade which releases chemicals into the water, turning them toxic and they can be degrading for up to 500 years in some cases:

Before degrading completely, the plastic item is in the ocean and causes confusion amongst sealife who might get trapped in it or even eat it – passing the plastic chemicals right up the food chain.

The time we have to save the Arctic from dramatic ice loss is running out. Within 21 years the Arctic could be completely ice-free.

Not only is this hard to imagine (even for the majority of us who haven’t seen the Arctic with our own eyes) but could further impact the planet in a number of ways:

Unless serious change is made in the next decade then it could be too late to do anything about climate change. The Intergovernmental Panel on Climate Change (IPCC) reported that carbon emissions need to be cut by 45% as soon as 2030 to keep the rise in global temperatures below 1.5C.

This is a large cut in global emissions that at the minute looks out of reach when you consider that energy usage is outpacing decarbonisation. To make matters even worse, some scientists believe that the next 18 months is the most critical period.

Home heating and electricity usage make up 40% of a home’s emissions, with transport being the most pollutant activity carried out by homeowners. 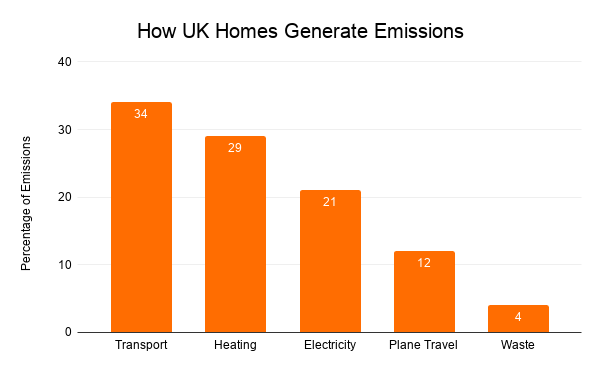 Energy usage in homes accounts for 14% of the UK’s total greenhouse gas emissions and according to the Committee on Climate Change (CCC), these emissions need to drop by 24% (compared to 1990 levels) if the UK is to achieve emissions targets.

Unfortunately, we’re currently off target. While a decrease is needed, in reality energy usage is increasing. In 2017 homes were using 1% more energy than the previous year.

How you can make a difference

If you’re concerned about the size of your carbon footprint, there are many ways to make your daily life more efficient:

A renewable heating system will help to increase the efficiency of your home, reduce your carbon footprint and lower your energy bills.

How renewable energy can cut your carbon footprint

Rather than burning fossil fuels, like gas or oil, a renewable heating system doesn’t cause pollution as it uses the Earth’s renewable resources, such as the sun, air and underground heat, to generate electricity or central heating.

Some renewable energy systems include:

Installing a renewable system for either central heating or electricity generation has the potential to dramatically reduce your carbon footprint.

Air source heat pumps extract heat from the air outside and using a fan that brings in outside air which can then be used to warm up your home’s central heating system.

Replacing a gas boiler with an air source heat pump could reduce your home’s carbon footprint by up to 3,900 kg each year, while replacing an oil boiler could save as much as 6,100 kg annually.

Ground source heat pumps are another type of renewable heating system that extracts underground heat where temperatures sit at 10-15°C all year round.

The installation of a ground source heat pump is much more complex than an air source heat pump as piping needs to be installed underground – which also means that you’ll need sufficient garden space.

It’s widely known that solar panels can generate free renewable electricity for a property (solar PV) but solar thermal panels use solar energy to heat water in a cylinder.

Solar water heating means that your boiler doesn’t have to work so hard to heat the water in a cylinder, reducing your carbon footprint and your energy bills. Depending on the fuel used to power your current heating system, you could reduce your home’s carbon footprint by over 270 kg each year.

Looking to reduce your carbon footprint?

Switching to a renewable heating system has the potential to reduce your carbon footprint as well as your energy bills. Visit Boiler Guide to get free quotes from fully-qualified heating engineers in your area.

All homes require a little TLC now and again but often we just don’t have the cash to...

NEXT POST Which are the Best Alternative Heating Systems?