Turning to renewable energy is a high priority as the UK looks to cut carbon emissions by 80% by 2050. To achieve this, the 80% of UK homes fuelling their central heating system with a gas boiler will need to replace it with a renewable alternative.

Rather than completely removing all of those boilers, could switching the gas network to hydrogen be the future of home heating?

Why switch from natural gas?

To consider the advantages of home heating with hydrogen, why do we need an alternative to heating our homes with gas?

Simply put, natural gas is a fossil fuel that’s not only in short supply but also emits greenhouse gases, such as carbon, into the atmosphere. The gas emitted by natural gas can’t leave our atmosphere, which is causing climate change and unless drastic action is taken to reduce the amount of carbon being emitted into the atmosphere, it will cause irreversible damage.

Targets have been put into place for the UK to reduce its carbon emissions (compared to 1990 levels) by 2050 and renewable heating systems are the key to meeting that target.

It’s already been announced that gas boilers will be banned from new-build homes from 2025 but what’s the solution for the 80% of the 27 million UK homes already using gas boilers? One answer is the hydrogen boiler.

Renewable technologies are more popular than ever thanks to being able to help homes reduce their impact on the environment. As well as hydrogen, there are many sustainable central heating and hot water solutions available, including:

While these are all highly efficient alternatives that will help to reduce the carbon footprint of your home as well as your energy bills, they can be costly or even impractical to install.

For this reason, replacing the natural gas network with a ‘low carbon’ alternative, such as hydrogen, is seen as a practical way of sustainably heating homes in the future.

What are the benefits of hydrogen?

Hydrogen is a great alternative to natural gas for a number of reasons:

In comparison to burning fossil fuels to heat our homes, such as natural gas and oil, that release carbon into the atmosphere, causing damage to the planet, hydrogen only produces water and heat. No carbon whatsoever.

It’s even possible to use a natural gas as well as hydrogen, which would help to significantly reduce the carbon emissions of your home significantly.

There’s a big difference between the energy held by hydrogen and natural gas, with 1kg of hydrogen holding the same amount of energy as 2.8kg of gasoline.

Can use the same pipelines as gas

Switching to hydrogen from natural gas couldn’t be simpler as it can use the same pipelines, fittings and even boilers. If there was to be a nationwide switch to hydrogen, the majority of gas boilers already installed across the UK could remain in use with there being no need to replace the central heating system.

Solution for homes unsuitable for a heat pump

For homes looking to adopt a more environmentally-friendly heating system but are unable to install and air source or ground source heat pump, a hydrogen boiler could be the perfect solution.

A hydrogen boiler is one of the renewable heating technologies that entitles you to receive government payments through the Renewable Heat Incentive (RHI).

The RHI is an incentive for homeowners to adopt renewable technology and entitles those eligible to a fixed annual payment.

Are there any downsides to hydrogen?

Despite the benefits, there are a few considerations to make when it comes to hydrogen.

At the moment, producing enough hydrogen to meet demand isn’t cheap and can be done either by electrolysis or Steam Methane Reforming (STR).

Electrolysis is a process whereby electricity is used to split water into oxygen and hydrogen, while STR involves methane from natural gas being heated with steam to produce carbon monoxide and hydrogen.

While hydrogen won’t emit carbon when it’s burnt within the boiler to produce heating and hot water for the home, producing hydrogen can.

Hydrogen is considered a hazardous gas as it’s highly flammable, so before introducing it to domestic settings, this safety concern will need to be addressed.

When burnt, hydrogen produces around 60% more water vapour than natural gas, leading to an increased amount of condensate forming in the boiler. This could lead to faults developing with the electrical components within the boiler, so this will also need to be tackled.

What do heating engineers think?

We asked the following of heating engineers on the Boiler Guide Twitter account whether they think hydrogen is the best alternative to natural gas. The results showed that a vast majority would support a switch to hydrogen, with 67% believing that hydrogen is the future of home heating. 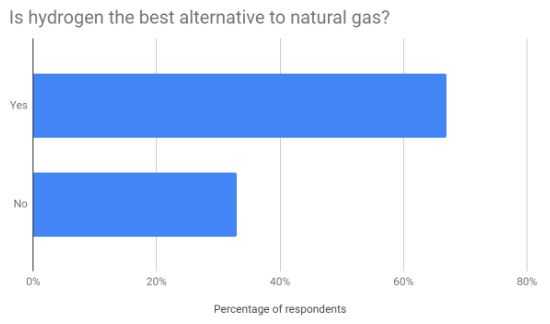 Around the world, projects are being carried out to find an efficient way of producing low-carbon hydrogen. One such project called the HyDeploy project, being carried out by Keele University, will trial using 20% hydrogen and 80% natural gas on a private gas network using the same pipes and boilers and is due to begin in summer 2019.

An electric combi boiler is the ideal choice for small and off-grid homes but the running...

NEXT POST UK to Target Net Zero Carbon Emissions by 2050

By 2050 the UK will be producing ‘net zero’ carbon emissions, outgoing Prime Minister...