The positive environmental impact of solar energy makes solar panels well worth the investment – and that’s before you even get to the potential savings on your energy bills.

In the UK, the vast majority of energy is generated by burning fossil fuels – a process that isn’t sustainable and emits greenhouse gases into the atmosphere.

Solar energy is the complete opposite of fossil fuels as it’s an energy source that will never run dry and can be harnessed without emitting carbon.

The sun is a powerful source of energy. In fact, within an hour the sun sends more than enough energy to power the whole world for a year. And this energy can be converted into electricity without polluting the environment.

For a number of years, the vast majority of electricity generation in the UK has involved the burning of fossil fuels such as coal, gas and oil. Fortunately, now that awareness of the positive environmental impact of solar energy has grown, we’re seeing a shift in how electricity is generated. 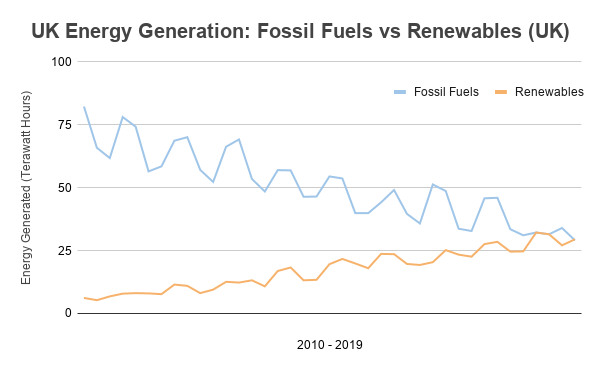 While this is promising news, solar only makes up 6% of renewable electricity generation in the UK. This is despite it being an incredibly powerful, sustainable and environmentally friendly energy source.

Depending on the type of solar panel system installed, the solar energy harnessed can be used to produce either electricity or hot water:

How does solar energy help the environment?

The vast majority of electricity supplied to properties around the UK is generated by burning fossil fuels. Generating electricity in this way emits carbon into the atmosphere, a leading cause of climate change.

Burning fossil fuels isn’t the only way to generate electricity as renewables can do the same job. And these renewable alternatives, which includes solar energy, are much kinder on the environment.

Why is environmentally-friendly energy generation important?

The sun is sending energy to earth all the time and much of this energy radiates back out into space. However, with increasing levels of carbon in the atmosphere, more of that heat is being trapped in the atmosphere, causing global temperatures to rise.

Carbon is effective at trapping heat so with more of it in our atmosphere, climate change is an increasing concern. To combat the amount of carbon being released into the atmosphere as a result of human activity, big changes need to be made in almost all aspects of life and you can make a difference from home.

Further the environmental benefits of solar with a solar battery

For all of their benefits, solar panels are only able to generate energy during daylight hours. This means that during the night they won’t be generating free renewable energy for the home. Unless, of course, a solar battery is added to the solar system.

Solar batteries store excess energy generated by the solar panels during the day so that it can be used at a time when the panels aren’t producing electricity.

The positive environmental impact of solar energy is only one of the many benefits that installing solar panels has to offer. So if you’re considering having a solar photovoltaic (PV) system installed, these are the big advantages:

Additionally, the fact that solar energy generation doesn’t emit carbon into the atmosphere isn’t only good news for the environment but our health too. Research carried out by the National Renewable Energy Laboratory (NREL) showed that investment in solar panels would help to reduce various pollutants that can lead to a number of respiratory health conditions.

When it comes to solar panel installation, it’s important to ensure that they’re installed in the most efficient position. This will ensure that your solar system is able to deliver the highest possible output at all times.

The installation of any solar panel system must take into account all of the following:

To ensure that your solar panels are installed in the most efficient manner, you should hire an MCS certified (or equivalent) installer. Visit Solar Guide today where you can get free quotes from up to 3 fully-qualified solar installers who work in your area. With your quotes in hand, you’ll be in a position to compare the quotes and be confident that you’re getting the most competitive price.

The ideal heating system is one which keeps us comfortable, works quickly, is cheap and...

Central heating is essential to keep our homes warm but could our trusted heating systems...