National Grid believe that the UK’s electricity system will operate with zero carbon emissions by 2025 after UK records greenest ever winter.

October 2018 to March 2019 saw increased renewable electricity generation and a drop in coal, helping it to become the UK’s greenest winter on record.

High temperatures and heavy winds have been labelled as the main reasons for the UK’s reduced reliance on coal power stations by National Grid.

Winter 2018-19 was the 5th warmest winter over the past 59 years which reduced public demand for energy, putting less strain on providers.

Strong winds were also experienced during the winter months, meaning that wind farms were able to generate high levels of renewable electricity.

Increased generation from renewables and less reliance on coal meant that the amount of carbon being produced to generate electricity stood at an average of 242.8 grams between October 2018 and March 2019. 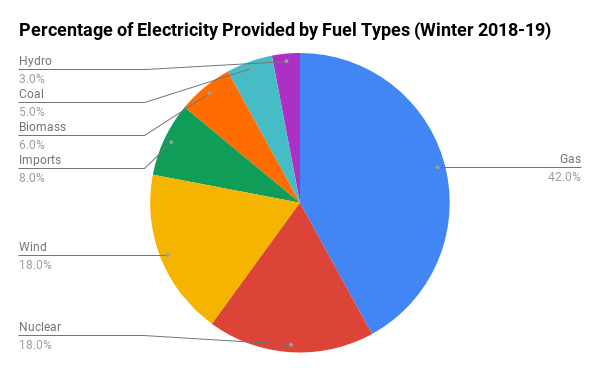 Speaking about the UK’s greenest winter, Fintan Slye at National Grid said: “ More renewable power generation and less coal is a trend that is here to stay and this carbon intensity milestone shows the pace of change in the UK energy industry.

“We believe that by 2025 we will be able to fully operate Great Britain’s electricity system with zero carbon.”

By 2050 the UK will be producing ‘net zero’ carbon emissions, outgoing Prime Minister...

NEXT POST UK to Have a Hydrogen Production Facility in 2020s

The UK energy industry has made its most significant move yet in the fight against...