Fuel poverty has been around for a long time, although it is only within the past couple of years the issue has become a truly nationwide problem. 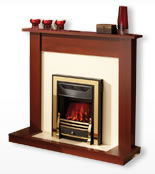 Higher energy bills coupled with colder winters have ensured many households throughout the UK have experienced some degree of fuel poverty and the recession has also played its part in creating financial difficulties for energy consumers more generally.

Unfortunately, fuel poverty is not a problem that can be easily solved, as it is expected that average fuel bills will rise further in the near future; furthermore, energy-saving measures such as replacing older boilers for newer, more energy-efficient central heating systems require an initial outlay, which households affected by fuel poverty may not be able to afford.

A couple in Sunderland, however, has been able to benefit from an upgraded boiler through funding provided by Baxi and Eaga plc. This funding allowed National Energy Action (NEA), a charity commissioned to tackle fuel poverty, to install a high efficiency Baxi Bermuda fire and back boiler unit in the pensioners’ North East home.

The move has already produced startling results, with the pensioners, who are in their 60s, reporting a massive 34.8% saving on their winter gas bills. Previously, the couple’s fuel bills topped a staggering £1,500 per year, so cutting this amount by over a third ought to be seen as a huge success.

It was because of the pensioners’ expensive annual fuel bill they were selected for the trial, which is currently evaluating the impact of upgraded boilers and will most likely be extended to others across the country.

A household is considered to be in fuel poverty if it spends 10% or more of its income on domestic energy costs. Replacing old boilers can be an expensive task, even with the help of Government incentives.

In the present case, the couple’s existing boiler was over 25 years old and around 60% less efficient than the Baxi Bermuda BBU HE. NEA Technical Officer, Adam Jones, explained that the couple’s bill for December to April 2008-2009 was £337.15, but only £220 for the same period plus three weeks in 2009-2010 after the installation.

With alternative energy power sources for the home becoming more and more accessible and...

Baxi has received the Green Innovation Award earlier this month for the Baxi Ecogen...