The Low Carbon Buildings Programme (LCBP) was introduced in April 2006 as a means of providing funds for the installation of microgeneration equipment for homeowners and not-for-profit organisations. 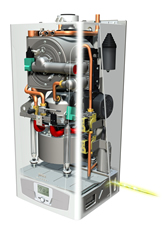 Since the scheme was launched, the LCBP has issued around 20,000 grants, which will no doubt help the UK meet its low carbon targets. Unfortunately, the LCBP was scrapped when the Conservative and Liberal Democrat parties took power; as part of public spending cuts worth approximately £6 billion, the Department of Energy and Climate Change (DECC) announced on the 24th May that the LCBP, which cost £34 million, will close together with other initiatives devised by the previous government. Although the low and zero carbon industry (LZC) has criticised the Government’s closure of the LCBP, Baxi Group prefers to focus on the decision’s silver lining.

Specification Channel Manager at Baxi Boilers, Simon Osborne, said: “On the surface, the termination of the LCBP appears to be bad news for the LZC heating sector. However, in the Queen’s Speech the Government announced the introduction of new Green Loans for those who want to save energy. These offer a more financially sustainable option than the LCBP and will, in our view, do more to grow investment in LZC technologies, especially for those on low incomes. Loans will be paid back through a pay-as-you-go scheme, which, unlike the LCBP, does not require the homeowner to finance the LZC technology up front”.

Mr Osborne praised the introduction of the Microgeneration Certification Scheme (MCS), which is supported by the Department of Energy and Climate Change and covers all microgeneration products and services. MCS is an independent scheme using consistent standards to evaluate and certify microgeneration products and installers. Mr Osborne noted: “It [MCS] will effectively pass the ownership of being green from the eligible few under the LCBP to everyone. That has to be a positive step forward”. Homeowners may actually end up with greater access to low carbon central heating options following the closure of the LCBP. The Baxi Ecogen is currently the only micro-combined heat and power (Micro-CHP) appliance to achieve MCS certification; however, the Green Loans are expected to improve competition in this field in future.

The UK's carbon emission targets have been widely discussed by politicians, scientists,...

Environmental awareness has led to a number of changes to the ways in which people...