Environmental awareness has led to a number of changes to the ways in which people inhabit the Earth. In the UK, all new homes are built to specific environmental standards. 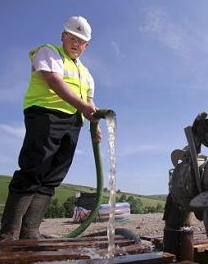 One of the key areas in which environmental savings can be made at the domestic level is central heating; ensuring existing homes are fitted with energy efficient A-grade condensing boilers can result in significant environmental/financial savings.

Although several developers in the UK have contemplated building boiler-free homes, central heating systems will likely remain a staple feature in most future builds. One development in the Pennines, however, has taken the notion of an eco-friendly community to a new level.

Situated one kilometre beneath the town of Weardale, Durham, resides several hot water reservoirs in deep granite fissures. This natural source of hot water has been hitherto hidden from human access, yet it is set to play a crucial role in the hot water central heating systems of a new rural community. As developers continue to work towards the creation of the Weardale ‘eco-village’, engineers have installed a 400-metre borehole in the valley to test the supply of naturally occurring hot water.

This week, Professors Paul Younger and David Manning of Newcastle University tested the thermal water supply ahead of further development work. Professor Younger explained the system would tap into the natural thermal reservoirs located underground to provide natural hot water for use in homes. Professor Younger said: “The system works in just the same way as central heating constantly circulates between a home’s hot water tank, boiler and radiators”.

The remarkable feature of the Weardale hot water heating system is not so much naturally occurring thermal reservoirs will be tapped for use in homes but the developers have devised a way in which the water can be recycled for continuous use.

Cleaning and heating the water for continued use requires significant energy in artificial systems, so a more natural process will be favoured. Professor Manning explained: “The water goes back into the rock at a depth of a little under half a kilometre, then works its way through a maze of fissures to the extraction borehole, heating up again on the way”.

The Low Carbon Buildings Programme (LCBP) was introduced in April 2006 as a means of...

The Chief Executive of the Committee on Climate Change, David Kennedy, has just warned...