Britain’s solar industry is set for a boost after manufacturer Sharp Solar announced plans to relocate its headquarters in Germany to Wales. 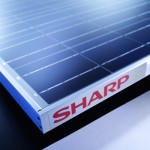 The timing of the announcement could not have come at a more favourable time for the UK solar industry, which has suffered several knocks in recent months. In April, Feed-In Tariffs (FITs) were cut from 43.3p per kWh to just 21p. Soon afterwards, Britain’s “greenest ever government” agreed a further reduction, this time to 16p per kWh, effective from August. Additional solar subsidy cuts are expected at least twice a year to keep up with anticipated savings on manufacturing costs.

Many industry experts had feared the savage cuts would spell the end of Britain’s fledgling solar industry, but Sharp Solar’s plan to move its headquarters to Wales  – as revealed by the Guardian – is likely to breathe new life into the sector.

In Germany, solar PV technology is fast becoming a viable replacement for systems relying on fossil fuels and nuclear power. Last month, the European country set a world record for generating solar power. It produced 22GW of electricity over a period of 24 hours. Equivalent to the output of twenty nuclear power stations, the figure was sufficient to meet 50 per cent of Germany’s energy needs at one stage (demand changes constantly).

The German population has been inspired by solar technology, which it feels is the perfect replacement for dangerous nuclear. So, why would Sharp Solar decide to relocate from a country that is committed to solar PV to one that has cast a shadow over its potential?

General Manager Andrew Lee explained: “There was some drop in demand in the UK as a result of the cuts, but that was related more to a lack of consumer confidence than the Feed-In Tariff. There were a lot of mixed messages around solar investments for a while, but we expect that to improve”.

It would appear that Mr Lee believes the UK solar industry has a bright future, adding that the “UK solar market has been through a turbulent 18 months but, through innovating and adapting, it is well placed to grow”.

If solar manufacturers are willing to exploit the potential of the UK market, perhaps government ministers were right in slashing subsidies.

Most people still don't give much thought to what goes in their light fitting. But if you...

A charitable organisation set up to lower electricity and gas double glazing bills for...