Armed with a giant spoof energy bill, dozens of Greenpeace campaigners have staged a protest today outside Centrica’s head office in a move designed to highlight the plight consumers face over “rip off” energy bills. 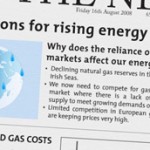 Protesting against high energy costs which they say are fuelled by rising gas costs, around 65 protesters blockaded the road leading up to the company’s head offices in Windsor, Berkshire earlier this morning. Angered by what they say is Centrica’s reliance on “expensive, imported gas” the protesters.

Rather than investing in clean green renewable energy, Greenpeace say that Centrica, who own British Gas, is in fact responsible for keeping energy consumers hooked up to expensive gas when it should be investing in energy efficiency. And that instead of supporting renewables and energy efficiency the company, they claim, has in fact lobbied the Government to support gas in the energy mix. The Greenpeace volunteers used the protest as a means of highlighting the need to get off the roller coaster that is gas prices and to do more to bring energy bills under control once and for all.

According to the environmental group, while average home heating and electricity bills rose by £150 last year – and rising gas prices was solely responsible for £100 of that increase – subsidies for renewable energy projects are responsible for just £25 in the case of an average energy bill.

“Centrica is ripping us off. The bills that they are sending out are soaring, and that’s because Centrica uses too much expensive, imported gas,” said Greenpeace campaigner, Lawrence Carter.

“If Centrica instead invested in clean, cutting-edge renewable energy and energy efficiency, they would help to bring both household bills under control and to tackle climate change,” he added.

Officers from Thames Valley police were called to attend the disturbance.

Achieving a remarkable 100% growth in turnover in the last 12 months, an energy company...

A report by the Department of Energy and Climate Change (DECC) has revealed that solar PV...