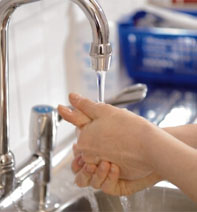 Burst pipe and leaking water damage is costing freezing Britain. The warning comes from the Association of British Insurers (ABI).

According to the ABI the damage caused by frozen and burst pipes and leaking water could top £650 million – that is over £7 million every single day.

Last winter, the coldest for 30 years, insurers paid out £644 million to homeowners and firms following damage caused by escape of water.

The damage means households could suffer from flooding and costly repairs.

To reduce the risk of frozen and burst pipes during this winter, the ABI is advising householders to:

• Ensure that loft water pipes and water tanks are insulated. • Know where your stopcock that turns off the incoming water supply is, and make sure that it works. • If you will be away from the home on holiday or on a Christmas break ensure that it is kept as warm as possible. If you are away for a long time it may be worth draining your cold water system.

If a pipe freezes:

• Thaw out the pipe using gentle heat such as towels soaked in warm water or a hairdryer. • Remove furniture and carpet (where practical) near to the frozen pipe. This will minimise damage if the pipe bursts.

If a pipe bursts:

• Turn off the water at the stopcock. • Switch off the central heating to avoid further damage. • Open all taps to drain the system. • Contact your home insurer for advice. Most provide 24 hour emergency helplines that will arrange for repairs to be carried out as soon as possible.

Nick Starling, ABI’s Director of General Insurance and Health, said: “Freezing winter weather may have arrived early this year, but insurers are ready to deal with the misery and disruption it can cause. As well as offering advice on how to keep your home safe this winter, insurers are poised to come to the aid of homeowners and businesses that have to face the often considerable damage that a burst pipe can cause.”