US tycoon Donald Trump has pledged to fight the building of an offshore wind farm near his championship golf course in Aberdeenshire, because he claims it would spoil his view. 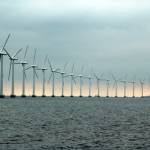 According to George Sorial, managing director of the Trump Organisation, the billionaire property developer is determined to use “any legal means” at his disposal to fight the proposed wind farm. The offshore wind farm is set to be built in Aberdeen Bay, which is about 1.5 miles from the championship golf resort Trump is currently having built at the Menie estate, near Balmedie.

The golf course is due to open in July next year, and Trump has long-standing issues with the proposed £200 million offshore wind project. Having already been cut down from 33 wind turbines to a maximum of 11,  following safety concerns, Trump is still unhappy with the smaller proposal, due to the height of some of the turbines. With some of the offshore wind turbines standing up to 195 metres in the water, they would be more than twice the height of Big Ben.

Despite Trump’s determination to fight the offshore wind farm, it’s more than likely his objections will fall on deaf ears. Not only is the wind farm supported by the Scottish Government and the European commission, it is one of a number of test centres viewed to be essential if the UK stands a chance of reaching its 7,000 offshore wind turbines target.

David Rodger, a spokesman for the wind farm scheme, known as the European Offshore Wind Deployment Centre, said: “We have been in regular contact with the Trump Organisation and acknowledge the concern raised.”

He added that they have made a strong case for the economic and environmental benefits of the wind farm, in terms of global research and development of the renewable technology. Mr Rodger said it is of “strategic importance to Aberdeen, and Scotland’s renewable energy ambitions.”

A joint venture between the Aberdeen Renewable Energy Group, Swedish electricity company Vattenfall and French sub-sea engineering firm Technip, developers are ready to begin construction of the centre, having submitted an application to Marine Scotland, the agency responsible for managing Scotland’s seas

The centre, which has been eight years in the planning, will test and demonstrate up to 11 next-generation offshore wind turbines.

A report in the Guardian has highlighted the strength of negativity surrounding renewable...