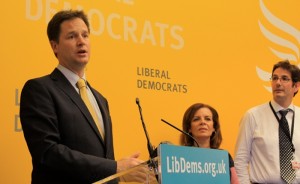 As the UK edges closer to the General Election, the three main political parties – Labour, Conservatives and Liberal Democrats – are doing their utmost to persuade voters that they have what it takes to drive the nation forward.

Numerous issues have been discussed thus far, with the economy receiving the most attention, which is perfectly understandable in light of the recession. One important issue that has, at least until recently, received only minimal coverage by the three main political parties is arguably one that ought to be their main priority: the environment.

Unusually, the Labour and Conservative parties have been mostly quiet on this issue; although, the Tories did confirm earlier in the month that they would replace the Renewable Obligation Scheme with extended feed-in tariffs – a proposal that was met with little enthusiasm in the renewable energy sector.

Labour are likely to continue with their existing renewable energy targets if they manage to secure another term in power, albeit with some adjustments. Nevertheless, the Labour and Conservative parties are yet to outline a sufficiently ambitious green energy strategy that is capable of forcing significant change. The Liberal Democrats, on the other hand, aim to make Britain a zero-carbon nation by 2050.

As part of Liberal Democrat green policy, existing UK woodland would be doubled by 2050 – this alone would reduce carbon emissions by around 16 megatonnes. The Lib Dems also pledge to increase the use of carbon capture and storage (CCS) technology and would introduce loans of up to £10,000 for homeowners wishing to improve the energy efficiency of their homes.

According to UK Government targets, the nation must ensure that 15 per cent of the energy...

The internet's most successful search engine company, Google, has continued to diversify...