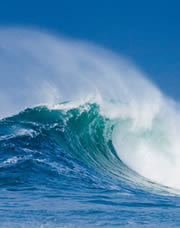 Islay is one of Scotland’s most famous and beautiful islands. With a population of around 3,500 and approximately 620 square kilometres of land, the island comprises a close community of inhabitants and features stunning scenery. Tourism is one of the key industries in addition to birdwatching and malt whisky distilling, whilst the climate in the region is relatively mild due to the Gulf Stream. Indeed, Islay is a lovely place to live or visit.

However, Islay’s spectacular landscapes are under threat from its population’s demand for electricity. Whilst this tranquil Scottish island offers a relaxed and uncomplicated way of life, people living there or on holiday will expect to enjoy a similar standard of living as they would back home. Nevertheless, generating electricity for the island can be an unsightly task, especially if certain forms of green renewable energy are used. For instance, wind turbines are rather ugly beasts that dominate the horizon and would spoil the attraction for many tourists. Thus, ScottishPower is drawing up plans to provide electricity from an altogether different form of green renewable energy.

Indeed, the Sound of Islay has been earmarked by the Islay Energy Trust for the development of a tidal energy site expected to generate around 10MW of electricity. If plans go ahead, the Islay tidal energy project will be one of the largest in the world and neighbouring countries will be watching closely to explore the effectiveness and viability of a project on this scale. With expected costs in the region of £50m, development of the site would take years to complete. Nevertheless, a successful tidal power project for Islay would represent a permanent move towards green renewable energy for its community.

The so-called Nimbys, or 'not in my back yards', have been blamed for many things over...

There have been concerns over Britain's move from traditional incandescent bulbs to their...