According to a report from the trade association RenewableUK, the UK is lagging far behind many other European nations when it comes to the development of onshore wind energy.

The new industry study has set out to counter claims that the countryside is ‘paved with turbines’, with research claiming that the UK currently has only one wind turbine per 100 square kilometres. 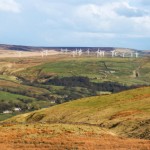 The UK is lagging far behind European leaders in wind energy, with Denmark currently boasting an average 10.85 wind turbines per 100 square kilometres, whilst Germany has 5.95 turbines, and the Netherlands 5.54 turbines.

The study also argues that opposition to wind turbines is far less entrenched than many reports suggest, and that polls indicate public support for wind farms. According to the report:

“From 2006 to 2009, the Department of Energy and Climate Change published an annual poll on attitudes towards renewables. It is indicative that the percentage of people disagreeing with the statement that ‘they would be happy to live within 5km (three miles) of a wind power development’ has actually fallen from 24% in 2006 to 21% in 2009.”

The figures have been released to coincide with a new campaign, organised by RenewableUK. Dubbed ‘Action for Renewables’, the campaign is backed by energy companies, green NGOs and trade unions and aims to step up calls for increased investment in clean energy sources. ‘Action for Renewables’ is also calling on the government to provide effective support for the sector through its Energy Bill, Localism Bill and Electricity Market Reforms.

“Survey after survey has shown a majority of the public in favour of the expansion of renewable energy – and yet, at the local level, it’s becoming increasingly difficult to get the go-ahead, even for community-led projects,” said Adam Bell, Renewable UK’s national campaigns co-ordinator.

“Action for Renewables is intended to give grassroots campaigners for renewable energy the tools, training and information needed to make a difference.”

In what looks set to be the UK's ultimate urban swim festival, British Gas and British...

Landlords could be forced to refurbish energy inefficient homes under proposed amendments...