Figures published by the Department of Energy and Climate Change (DECC) have revealed that homeowners in the UK are eager to avail of solar PV technology. 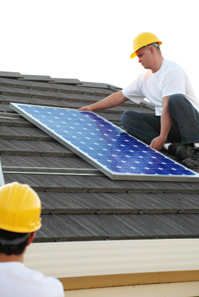 The DECC figures show that 11,314 Britons installed solar photovoltaic panels in the first quarter of 2011, constituting a significant increase on previous months. The surge in solar panel installations is most likely a result of the UK Government’s Solar Feed-in Tariffs (FITs), which were introduced last year after being devised by the previous Labour administration.

Under FITs, households can generate income by exporting solar-derived electricity to the National Grid. Households can also benefit from the clean renewable energy by using it throughout the home, thus saving hundreds of pounds on electricity bills.

Installed solar power in Britain now stands at 77.8MW compared to 26MW before FITs came into effect. The total number of domestic and commercial solar installations to have signed up to the FITs scheme has reached 28,505 and averaged a cost of £11,657 per domestic solar PV installation following a study by Solar Guide.

According to Ray Noble, a solar expert at Renewable Energy Association, the increase reported by the DECC is predominantly a result of continued domestic interest. Mr Noble said: “The vast majority of these installs are domestic and the surge is a result of rising consumer awareness, with people telling one another about solar.

“It’s not a rush to beat the Government’s solar review [announced in January] – most people haven’t even heard of the review. But I think the figures would have been even higher without the review”.

The Government’s review of FITs is likely to impact most negatively on medium to large-scale commercial solar operators, however, most installers are against plans to change the current system and a group of solar firms has applied for a judicial review of the Government’s decision to review the scheme. Homeowners ought not to be significantly affected by the review.

Mr Noble added: “The cost of solar is falling because solar panels are getting cheaper and the labour costs are coming down as bigger players and more competition enter what was once a cottage industry. We think the feed-in-tariffs [currently 43.3p/kWH for solar PV] could come down by as much as 30 per cent and still make financial sense for consumers”.

According to the Renewable Energy Foundation (REF), the UK has failed by some margin to...

Rio Ferdinand may be best known for stopping strikers en route to goal, but the...