A small Muslim community in Norderstedt, northern Germany is planning to build the country’s first eco-friendly mosque, which will feature wind turbines in its minarets. 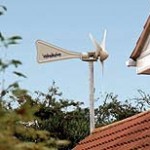 The £2.2m project, which is the brainchild of Hamburg architect Selcuk Ünyilmaz, would see the mosque become one of the first to turn the minaret into a wind-fuelled power source.

Commenting on the project, Ünyilmaz, who has a history of incorporating energy efficiency into his work, said: “I thought about how we could give sacral architecture an ecological focus. My design combines the modern with the traditional, so I wanted to give the minarets a contemporary function.”

The wind turbines will be housed in two 22-metre-high minarets and Ünyilmaz plans to install a pair of 1.5-metre glass rotor blades in each tower. The project will measure about 1,300 sq metres and will feature the mosque and a second larger building containing shops, travel agents, a cafe, hairdresser and offices.

The mosque will not be the first of its kind however, to use renewable energy, as the Islamic missionary group Tablighi Jamaat have plans to build a similar environmentally friendly mosque with wind turbines in its minarets in time for the London 2012 Olympics.

The blustery northern coastal town of Norderstedt is ideally situated for wind energy production, which is one of the reasons why Ünyilmazand opted to use turbines rather than solar energy. Wind turbines are one of the simplest methods of renewable energy. When wind causes the fan blades to rotate, it drives a generator which converts the rotational energy into electricity, supplementing the mains supply.

The minarets will help cover the building’s overheads, and provide around a third of its energy, although as it stands, the congregation does not yet have the funds in place for the project.

“We are confident that we can raise the money,” said Ugur Sütcü, the chairman of the congregation.

Sentinel has launched an awareness campaign to help homeowners save money by highlighting...

The chairman of Centrica, the parent company of British Gas, has said that it is all but...