Situated on a disused strip of land that was formerly a car park off the main road in Bell Green, Coventry, a new housing estate is set to change the way in which such projects are constructed in the UK. 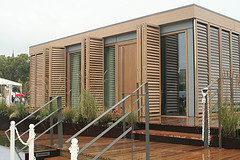 Passivhaus – a method of construction originating in Germany and employing ultra-high standards of energy efficiency – will be used on the Sampson Close project in Coventry for only the third time in the UK (previous Passivhaus builds were constructed at the behest of private owners who wished to create truly eco-friendly homes). The Sampson Close development will employ Passivhaus standards to create one three-bedroom house, four two-bedroom houses and eighteen two-bedroom flats.

Aside from the obvious environmental benefits of building homes to Passivhaus standards, occupants are expected to avail of substantially reduced central heating bills; indeed, current estimates suggest the typical Sampson Close resident will be paying just £1 on energy bills each week, which could result in savings of £300-£500 over the year. The so-called Bell Green scheme is run by Orbit Heart of England, which is one of the largest housing associations in the Midlands.

The Bell Green Scheme aims to provide affordable and environmentally friendly homes to people throughout Coventry and other parts of the Midlands. John Barnham, Head of Asset Management at Orbit, said: “this is a really exciting project. This is a back-to-basics approach, looking at energy loss and making a building thermally efficient so that whatever energy is generated is being used efficiently”.

A Passivhaus certified home is around 90% more energy efficient than the typical home in Coventry, which says as much about Passivhaus as it does the current state of residential properties in the Midlands. Passivhaus builds make excellent use of natural resources and surroundings; for instance, many Passivhaus homes feature large south-facing windows maximising the amount of sunlight that enters a property (and thus the heat and light therein).

Passive heat technology is used in place of central heating systems, with heat recovery units converting expended energy in areas such as the kitchen and bathroom to generate usable energy. Passivhaus represents a massive step forward for the local community in Bell Green.

Wirral-based renewable energy giants Stiebel Eltron has called for the Government to show...

The UK’s solar PV electricity market could grow five fold in 2010 and 30 times over by...