Donald Trump isn’t a man who gives up easily. And the billionaire US property tycoon doesn’t seem to be showing any signs of giving up fighting a proposed offshore windfarm in Scotland. 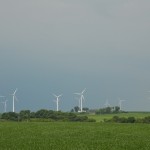 Trump has already voiced his objections in a letter to Scotland’s first minister, Alex Salmon, in which he described the wind turbines as “disastrous and environmentally irresponsible”. And with a second letter already having been fired off to the minister’s office, Trump seems to be relentless in his quest to block the windfarms development.

Earlier this month, the Trump Organisation filed an objection to the planning application, which will see a £200 million 11-turbine windfarm built off Aberdeen Bay, barely 1.5 miles from the luxury £750 million championship golf course Trump is having built in Aberdeenshire.

Trump’s second letter points to the wind turbines having a negative impact on Scottish tourism: “People do not want to travel from all over the world to go to Scotland in order to stare out at big, ugly structures. Trust me, they will go somewhere else,” said Trump.

“We have received a lot of comment on the plans to develop a project that will place Aberdeen, the north-east and Scotland as a leader in offshore wind technology development and we will take each and every one seriously, including those from the Trump Organisation,” said a spokesman for the project’s partners.

The future of home energy management looks set to get smart with the introduction of a...

On Friday the Government announced that it was to delay the launch of the Renewable Heat...